« America Gasps for Breath in the R&D Marathon
CollaborativeRank for del.icio.us »

(Via The Blog Herald). 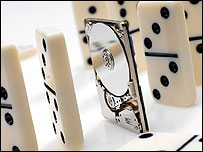 Siemens researchers have developed a cell phone featuring a built-in projector system. A laboratory model was presented at CeBIT 2005 in Hanover. The system makes it possible to project a complete keypad or display onto a surface. With a special pen, users can write on the virtual keypad and operate the phoneï¿½s functions.

Gizmodo has the neatest things. “This Quattro prototype alarm is a solid translucent block that has no visible buttons or markings. As the Quattro is rotated, its function changesâ€”on the side it’s a radio, tilted up it’s an alarm, and horizontally it’s a clock, each indicated by a contextual change in the display on the front. It gets better: the Quattro recognizes when you get close and lights up touch-sensitive buttons. Then it gets even betterer: a wirelessly connected teddy bear triggers the alarm’s snooze function when you give it a hug.” Too bad it’s just a prototype done by design students Didier Hilhorst and Nicholas Zambetti.

You are currently browsing the archives for the Gadgets category.